​Your Life on Earth: Philosophizing Purpose and Place in the twenty-first century.

The goal of this project was to put into words your reason for living or purpose. The question my project tried to answer was what gives my life meaning. I got my inspiration for the project from when I was on my link internship and found that building or fixing things was one of the most interesting and fulfilling things I had done in a while. This then leads me to create a box to symbolize this need for a project to have a purpose.
Some new insights I found when I was working on this project that I had were, you have to find meaning in the things you do and you have to find these things that give you meaning where ever they are. During this project, I came to understand my own philosophy better through attempting to find the reason I believe in it and where it comes from. The reason I wanted to know where it comes from is that a personal world view is often shaped by their past experiences. I wanted to know what experiences shaped mine and the reason they shaped them. Some of the books that have shaped my views were 1984 by George Orwell as well as some of the ted talks I have watched. In all of these pieces, it is stated that purpose is something you must find for yourself and only when you have it are you happy. Science has also played a large role in my world view, because learning how small and fragile we are in comparison to almost anything in the universe. From science, I have taken a semi-nihilistic view of the world in that you have to give yourself purpose or meaning in what you do. This is because others and the universe won't do that for you.
​
Questions I didn't find answers and questions I found include
What besides building of fun can give meaning.
What is being occupied or entertained worth in the larger scheme of things.
Why do I enjoy building things.
What can I find a greater purpose in.
What other things in life are worth while.

“Eating is an Agricultural Act”?:  The Ethics of Food in America 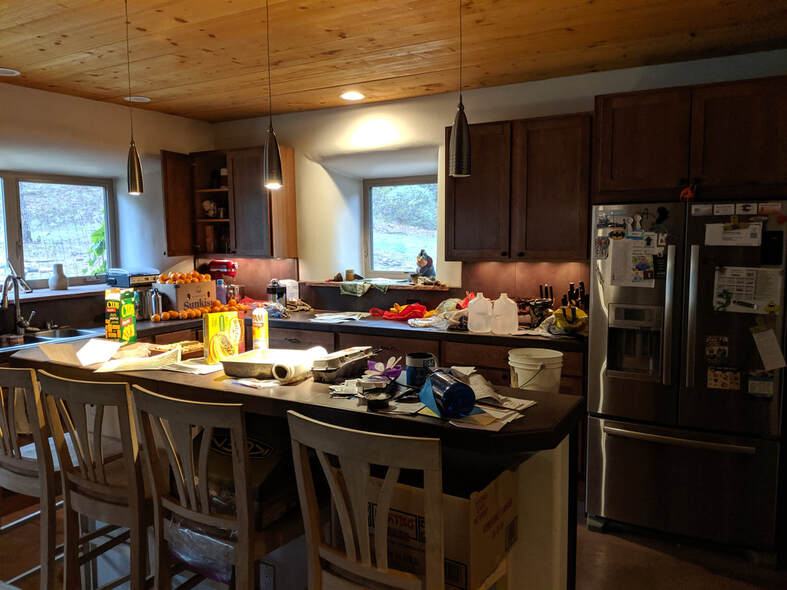 The purpose of this project in humanities was to understand the American food system and take our own stance on if it is bad, good or how it could be improved. The science portion of the project was to figure out the chemistry behind our own recipes and in what ways could we make them better. My project in humanities was about how the food system could be improved and why. Some examples of this were making farming practices more sustainable, how could the food be made healthier and why basing so much of the supply chain around fossil fuels is a terrible idea. For my science project I chose waffles for my dish to understand and improve. The concepts that I learned during this included the Millard reaction and the effects of cinnamon as well as the effects of sugar. The Millard reaction is all of the chemical reactions behind browning and ​caramelization.
The interdisciplinary aspects of the project impacted my learning by showing why things like waffles are so wide spread in world and the reason why many large company's make something similar. This being because many of the ingredients having the ability to be substituted with corn alternatives keeping cost low and increasing the profitability while maintaining taste. The Humanities side of the project showed me some of the down sides to this mainly being health and nutritional risks and how wide spread this is in many industries. I was able to understand some of the recipes used on the industrial scale because of chemistry.
​Ways that my thinking has changed are health worries, ethical decisions, and sustainability concerns. The health worries come from the adverse effects of sugar and many corn products have on the body if consumed regularly. Also learning some of the ways companies trick consumers has led me to morally disagree with their business practices. Ethical problems have also arisen from how workers are treated at may factories. Finally, Sustainability has also been in the back of my mind because of global warming and the fact that most if not all of the food industry are contributing to this problem through the use of fossil fuels, CAFO's and habitat destruction. Another issue this industry contributes to is the reduction in genetic diversity through mono-cultures. All of these issues have been brought to my mind because of this project and influenced my purchasing decisions.

A system that benefits no one
My food ethic is that you get out what you put in my reasoning for this is that if you treat animals terribly and spray harmful chemicals on your food it will make you sick or shorten your life
Some of the issues that have shaped my view of the food. These reasons include the system is unsustainable and only benefits those that are monetarily profiting from it, mono-culture reliance, diseases, environmental destruction, government subsidies, fossil fuel reliance, and labor force exploitation. The first issue is transportation fossil fuels will run out and the reliance that the current production system has in them is too heavy this is shown in the book “The Omnivores Dilemma”.  For example by there being central processing plants that are often far from where the food ends up and this causes fossil fuels to be used in the transportation of food. This use of fossil fuels also releases co2 and makes global warming worse this will make sea levels rise to make it harder to move to anything besides industrial operations.
The other issue with the industrial food system is in the harvesting of plants because it is made up of almost only mono cultures. The problems of this include one or more diseases being able to wipe out the food supply and reduced biodiversity as well as causing soil degradation. The process of soil degradation is when nutrients in the soil are taken away and not put back.  The reduction of biodiversity caused by mono cultures is because of companies only cultivating one crop and driving out native crops to build farms or not farming different varieties of plants this allows certain diseases to run rampant and drive the mono culture to extinction. Biodiversity is the number of different plants in an area. An example of mono cultures failing because one disease was the Panama disease killing off all of the commercial Gros Michel Banana in the 1950s and this could happen again with the current mono culture banana the Cavendish.  This problem can occur with any organism be it animal or plant. The reason it is not often seen in animals is because of the genetic diversity many species have. This is why inbreeding of certain animals like dogs, cows, cheetahs causes so many problems this is because of the genetic variation being reduced making an organism more vulnerable to diseases. Also, the individuals of that species are further spread apart compared to plants.
One of the other problems the system specifically the meat industry is the use of feedlots or CAFOs. One of the issue with feed lots is that with so many animals that close together it creates a breeding ground for diseases that can affect and kill both animals as well as humans. These operations also create many pollutants including methane and manure. Methane is a greenhouse gas 80% more potent than co2 this will increase global warming raising sea levels reducing the land available for human use and compounding all issues mentioned previously. While manure would usually be a good thing for the soil it at these sites becomes so toxic from it being so concentrated that it is dangerous to most organisms also it can run off from rain and infect local drinking water making people sick exposing people to more diseases and risking the creation of more deadly ones.
Knowing all of these things I still some times eat at fast food restaurants like McDonald's and other fast food restaurants because there is no other option and after learning these things the food has become tom taste terrible. It may just be nostalgia from when I was younger but nothing ever has flavor.To conclude these are the reasons the current food system is unsustainable and I will try my hardest not to support it in its current state.

Waffle Madness Reflection
The experiment was successful in helping us understand the characteristics of certain ingredients in the waffle however the larger picture of why consistency of the batter changed so drastically is still a mystery. Were able to find that sugar content allows for a more caramel texture and generally a better taste. Another point of interest we found was that cinnamon can help with taste but it is far more volatile in its results. We believe this comes from its flavor being overshadowed by the sugar. Through this, we learned how to subvert this by prioritizing one or the other allowing the flavor of one to be more pronounced. A few changes that could be made to the experiment would be making more waffles to have more data and to test and testing other variables. Some of the variables we would consider if we were to do this experiment again include milk content and the type of it. An example of different types of milk would be skim, 1%, 2%, etc, butter and whole milk. Another variable is the type of oil used to cook the waffle and the one introduced to ensure semi-liquid consistency.

In our tests, we always used vegetable oil and we believe changing this out with another oil or liquid would improve taste or change the consistency.
Some of the ways we could have improved reliability of the results were serving all of the waffles hot. The reasoning behind this is because waffles rapidly lose texture and consistency if they are left out of the iron. This could have had adverse effects on our taste testers as waffles were served at different temperatures because of our need to cook the waffles during the taste tests to ensure flavor. Another correction that could have been made to our testing procedure was having all of the waffles be taste tested closer to each other. The final alteration is having the testers test individually to make sure that their conclusions were not influenced by each other.

​In my own experience cooking a recipe for the first time is very similar to the scientific method in you take time to accurately measure as well as heat correctly. Other similarities include taking observations and remembering them or writing them down.  After this people usually cut corners to make the Process Faster or taste better without taking precise measurements or observations. This trend often only gets worse as time goes on because of the memorization of ingredients along with their effect on the food. Another set of differences is that safety is not as closely watched and measurements are often not precise and use imperial units. The safety concerns are different are mostly due to the processes and materials used. However, foods and substances like bacon, sausage, and boiling water run contrary to this. Contamination is often not a concern with cooks or again not as closely watched. The food scientist will, however, take extreme steps to stop contamination. Examples of this include sterilization of equipment as well as clean rooms are which are not uncommon in this field and many others in science. Cooks often use more chemically complex substances at the same time when a food scientist would either isolate the section of the recipe they are curious about or do the recipe on a small scale. Another thing cooks do is they test multiple variables at the same time.